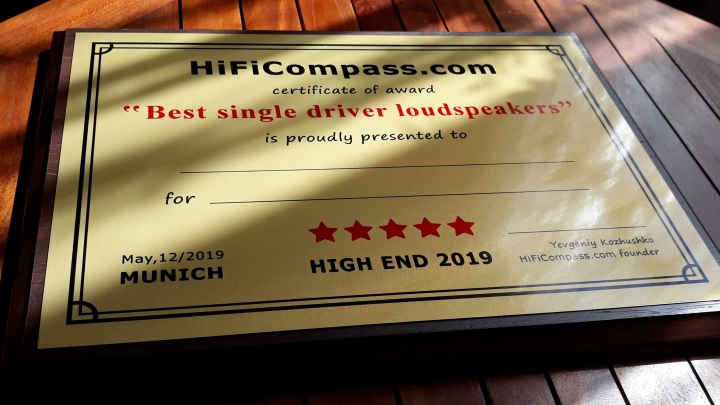 At the Munich HighEnd - 2019 show HiFiCompass established awards for exhibitors in three categories:

There were a lot of good systems at this exhibition and it was not so easy to choose the best ones, especially in the category of “3+ way”, as it was the most widely represented. When determining a winner, both the sound of loudspeakers and their cost were taken into account. So, in order:

On the picture: Piet de Vries, the founder audiotweaks.nl, next to the loudspeakers "Monitor 15HC"  of Tobian SoundsSystems (Switzerland).

It was the lowest populated category. If my memory serves me, I could manage listen to no more than five systems. By my opinion, the best among them were the loudspeakers "Monitor 15HC" made by the Swiss company Tobian SoundSystems. The loudspeakers are not small babies - their enclosure volume is around 200 liters, sensitivity 99 dB/W and they based on a coaxial 15" speaker in the "back horn" construction. Despite the loudspeakers actually belong to a two-way design, they have only one speaker driver, so got in this category.

The sounding can be described as very dynamic and having fullness, with rich low-mid range timbre, solid and articulate bass, good sound image. The high range is a little hot, and if it were a bit defeated, the tonal balance would be more neutral. 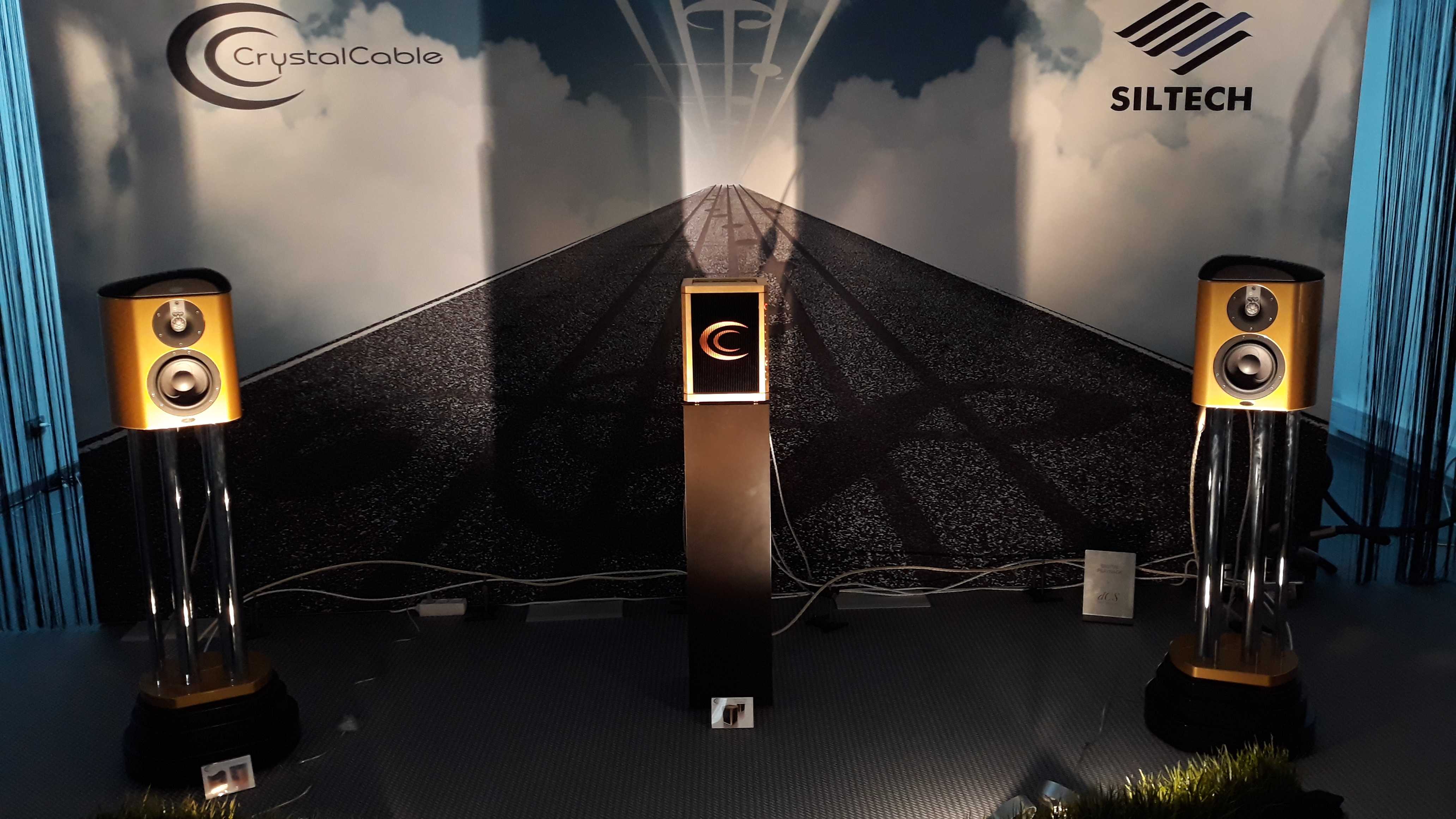 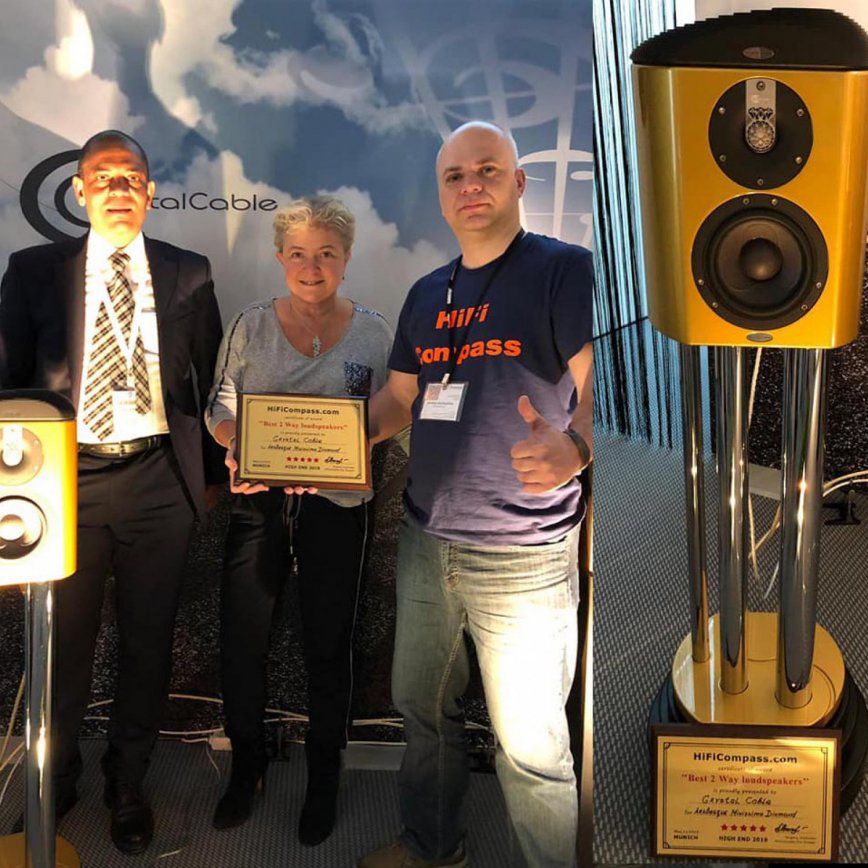 Against the background of a fairly decent group of 2-way competitors, among which were very good Falcon Acoustics HP80, these CrystalCable Arabesque Minissimo Diamond kids conquered me with its impeccable sound picture, magical depth and transparency, excellent balance, as well as tonal accuracy. In these kids a 5" midwoofer from ScanSpeak Illuminator series is responsible for bass and midrange, while the high frequency reproduction entrusted to Diamond dome tweeter from SEAS company. Yes of course, these speakers can't shake your body by thunderous bass as it just doesn't exist there at such a size, but  but what they can do makes you happy. Very nice kids but the retail price not for kids - around $20.000 for a pair. 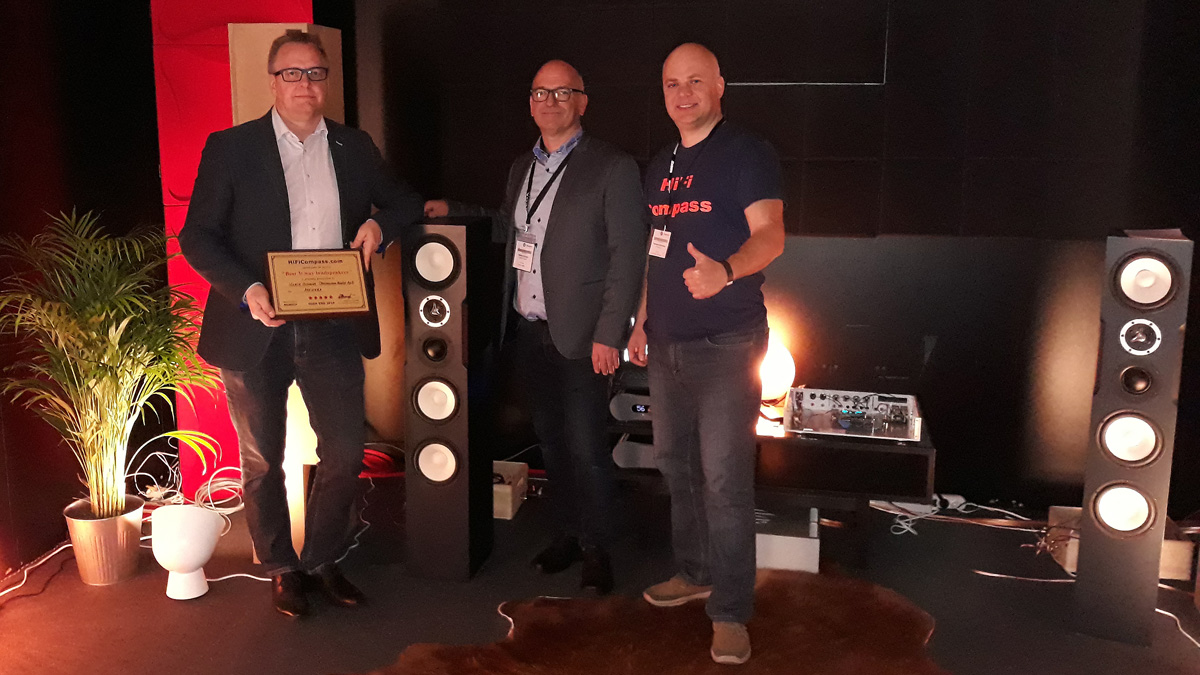 On the right: Bo Albrechtsen - Sales and Marketing Director (SB Acoustics), in the center: Frank Nielsen - CEO of Danesian Audio.
It was the larges category at the show - about 80% of all systems are here. I must admit that until the very last, the fourth day of the exhibition, the two systems - ATC SCM100SE and Wilson Audio Sasha DAW - were the favorites of mine. But things changed when on the last day I entered the small SB Acoustics demo booth, which was located in one of the halls on the first floor. Usually, the most "fat" systems are located in the atrium rooms on the second and third floors and they are large in size, that is allows exhibitors to better demonstrate the quality of their systems. Therefore, I left my visiting the halls on the last day, since I didn’t particularly hope to hear anything worthy there, and if I hadn’t managed to get around everything, I would not have regretted it. And in vain, as it turned out - two of the three winners were located exactly on the first floor!
I was very surprised by the sound of moderate size floor loudspeakers with five speaker drivers. Very balanced, without any audible frequency and phase responses defects, moderately detailed and open at the top of the range and quite deep and full-bodied in the lower register and midbass. But, what is a midrange! It wasn’t pushed into the background behind the loudspeakers, it didn’t jumped out of the speakers on me - it was exactly where it should be and in exactly the amount that was needed for the excellent musicality of the system. After listening to a couple of tracks that were being shown by the exhibitors, I asked to play some my favorite and at the same time not very simple ones, like “Abie” performed by Avishai Cohen Trio ("From Darkness" album) and “Private Investigations” by Dire Straits (album "Love Over The Gold"). I know perfectly well how they sound on different systems and what is hiden in them. The system handled these tracks perfectly.
When I had came to see the loudspeakers closer, I saw not heavy enclosures made of milled aluminum, Z-material, X-material, marble, carbon fiber or something else. No any legs, spikes, vibropods and massive plates under the loudspeakers. I saw a simple enclosures made of an usual MDF and an external crossover assembled on prototyping boards filled with inexpensive components. Some components even hung on the terminals of the loudspeakers.
?????
It turned out to be a demo concept-loudspeakers developed by the Ulrik Shmidt - an engineer of Danesian Audio company, whose main task was to demonstrate the potential of a new SB Acoustics midrange speaker MD60N-6 with a silk 2.5" dome. I was very surprised and it was exactly the case which show there is no need to pay tens thousands of dollars and to chase the big-name brand to get a good sound. Crazy quality/price ratio and well deserved reward! Ulrik Shmidt from Danesian Audio takes the award!
Because the loudspeakers exist in a single example, so far only in a demo version and it is impossible to find information on it, with the permission of its designer I will quote excerpts from our correspondense with him regarding the technical solutions used in the "Menara" loudspeakers.
Ulrik Schmidt:
"Hi Yevgeniy,

I am glad you liked the "Menara". It was designed mainly to demonstrate the MD60N-6 dome midrange driver

– and then I also wanted to do the bass compensation (due to the baffle-step) a little bit differently, as in conventional 2½-way speakers (or in this case a 3½-way speaker) with two identical woofers, you often end up with a little too much bass, as you don’t really lose 6 dB below the baffle frequency in an ordinary listening room (that would only be the case in a full anechoic room). Ideally, you would use three identical mid-woofers, each with a nominal impedance of 12 ohm. Two of these would be used as mid-woofers that run all the way up to the tweeter (or in this case the filler driver) and only one woofer would fill in below the baffle frequency – then you would end up with a neutral balance (i.e. flat bass response). Now, we don’t have standard 12 ohm drivers in stock and I wanted to use only standard drivers. Therefore, I used two 4 ohm mid-woofers (MW19PNW-4) connected in series for the upper section – they share a common sealed enclosure (close to Butterworth alignment). The single lower woofer is an 8 ohm driver (MW19PNW-8) that has 3 dB lower sensitivity than the 4 ohm drivers and it sits in its own vented enclosure. Had I been able to use three identical 12 ohm drivers, I would have put them all in a vented enclosure an tuned them exactly the same way (I could have used a vented enclosure for the 4 ohm drivers, of course, but instead I chose to experiment a little with different bass tunings, hoping for more accurate “fast” bass from the upper drivers, though I realized that they wouldn’t go very deep – I took a chance).

The tweeter is our TW29BN-8 (I didn’t need the high sensitivity of the 4 ohm version and besides, the higher driver impedance allows for smaller value capacitors in the filter).

We have decided to keep the Menara as a concept design, which is why I am not sharing the cabinet drawings or the crossover schematic. This is a company decision. At some point however, we might decide to make a kit speaker based on parts of this concept (there are no specific plans at the moment, though).

I can describe some details of the crossover (keep in mind that it is a flat vertical baffle with no physical offset of the drivers):

1) The high-pass filter for the tweeter is 3rd order with some attenuation (no L-pad, only series resistors). The tweeter is connected in reverse polarity (normally, in a system like this, you would expect this for the midrange/filler and not for the tweeter).

2) The band-pass filter for the midrange is asymmetrical (lower slope is 12 dB/oct, upper is 6 dB/oct). There is some attenuation and a little EQ/correction just above the upper crossover point. The impedance curve is equalized around the resonance frequency (this was not strictly necessary, but it did improve integration with the upper mid-woofers). Driver polarity is NOT reversed. This midrange driver covers the range from 1-6 kHz (see attached response curves – maybe you also saw this at the show). I have also attached the response curves for the final MD60N-6 prototype driver.

3) The low-pass filter for the upper mid-woofers is 2nd order with impedance equalization at the system resonance frequency (this ensures a nice roll-off without any bump/boost – it makes quite a difference in listening).

4) The low-pass filter for the lower woofer is also 2nd order with impedance equalization of the upper resonance peak of the vented system (as it would otherwise affect the electrical transfer function too much – as described above).

Notice that the two woofer filters are separate branches (as opposed to a cascaded filter, which is often seen in 2½-way speakers).

5) One more thing about the Menara crossover; there is an LCR-network across the input of the crossover (or the output of the amplifier, if you like) to equalize the impedance peak associated with the crossing between the upper mid-woofers and the dome midrange driver, as this would otherwise cause an electrical phase shift slightly above 60°. This is likely not a problem for a modern solid-state amp but still it can cause some colouration and this phase shift is a lot more than what you normally see in the crossover region of e.g. 2-way speakers.

6) The complete Menara has an electrical phase shift within ±15° (the lower impedance peak of the vented system is automatically equalized, as it is paralleled with the upper mid-woofers, whose impedance is quite low here, as it is somewhat below the resonance frequency of the sealed system – that was a nice side-effect of combining the sealad and vented enclosures).

I also forgot to mention the conditions for the Menara frequency response curve. It was measure 20° off-axis in our listening room at a distance of 1.5 meters and the input voltage (rms) was about 0.7 V." 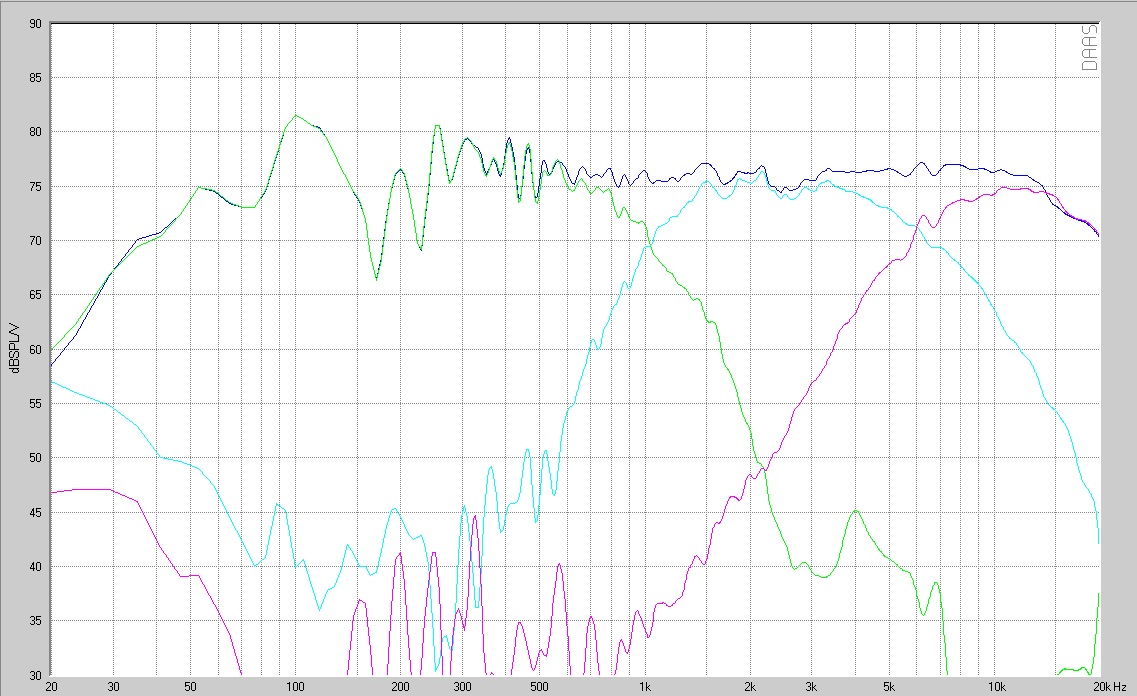 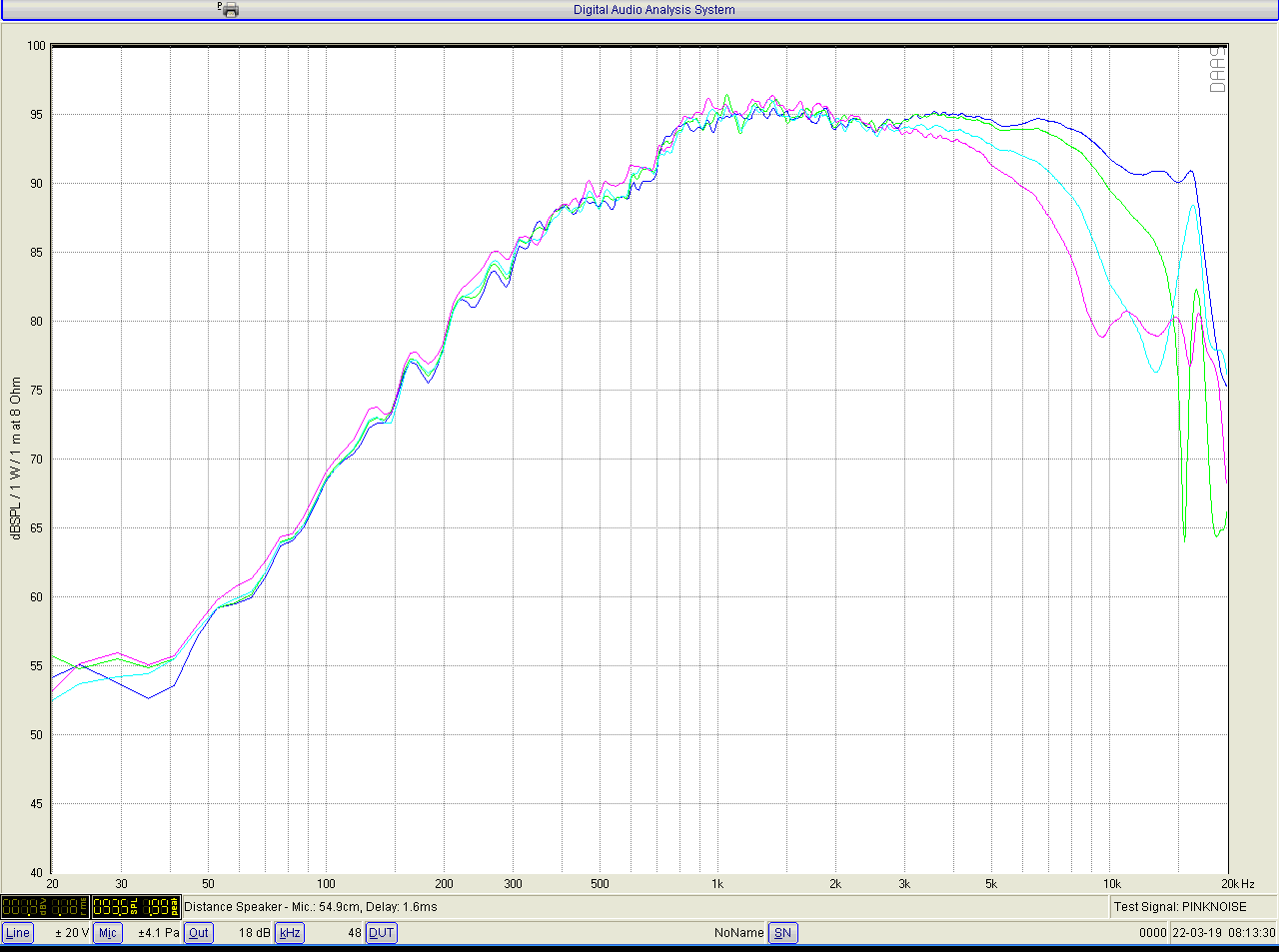 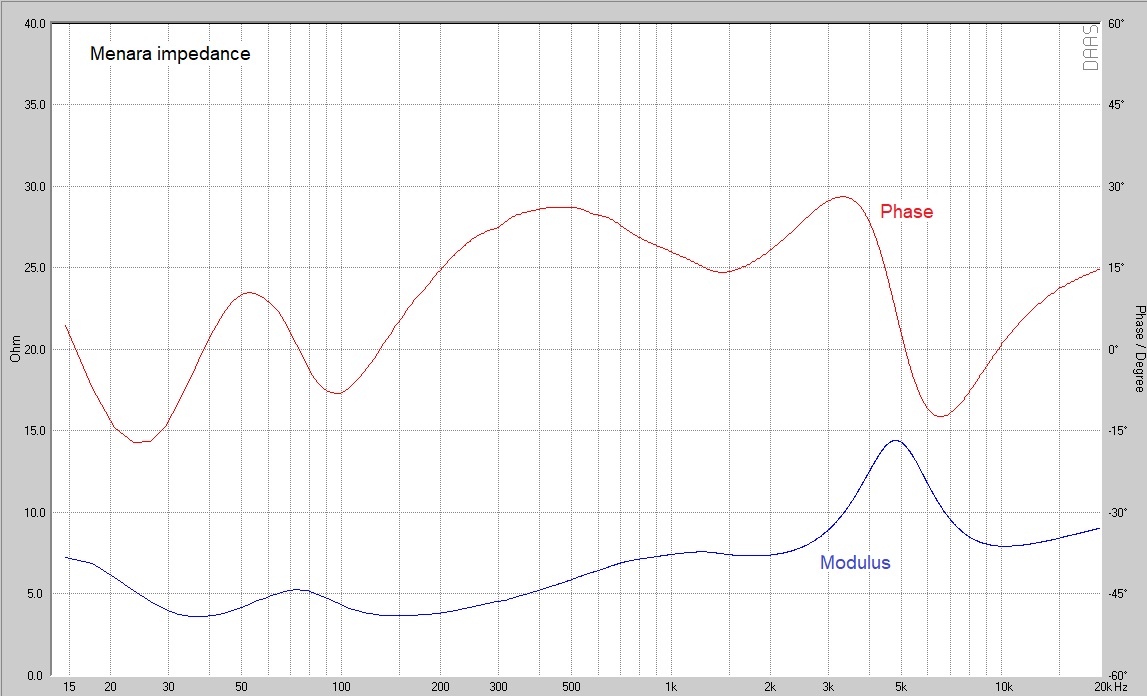 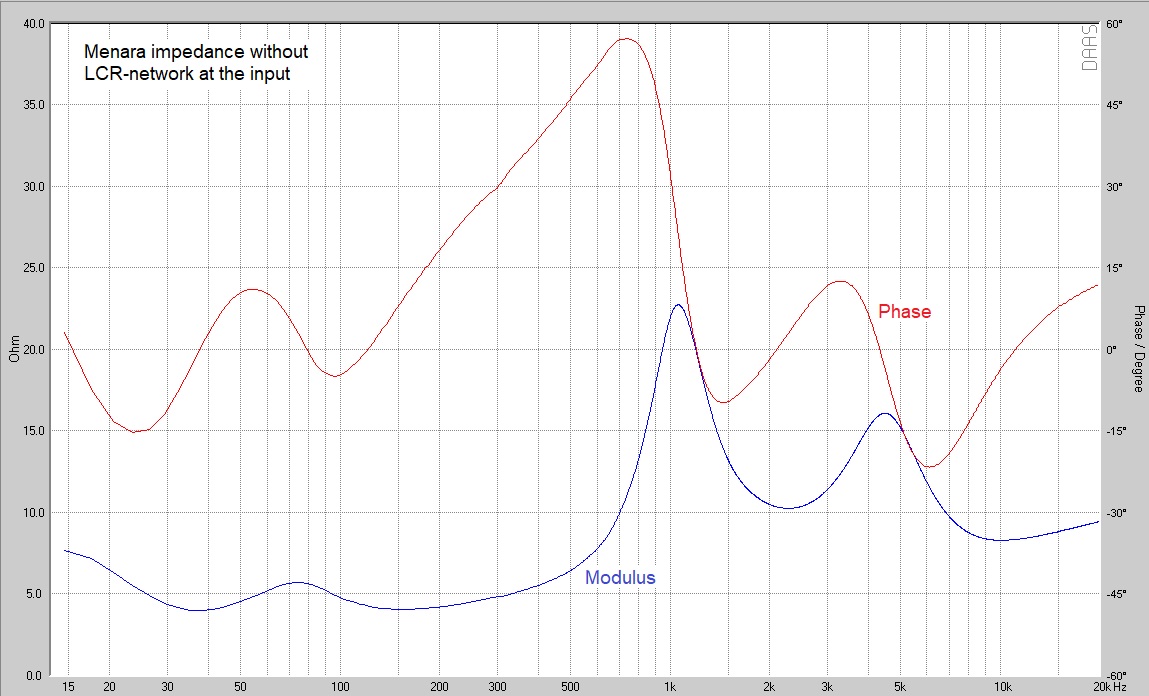 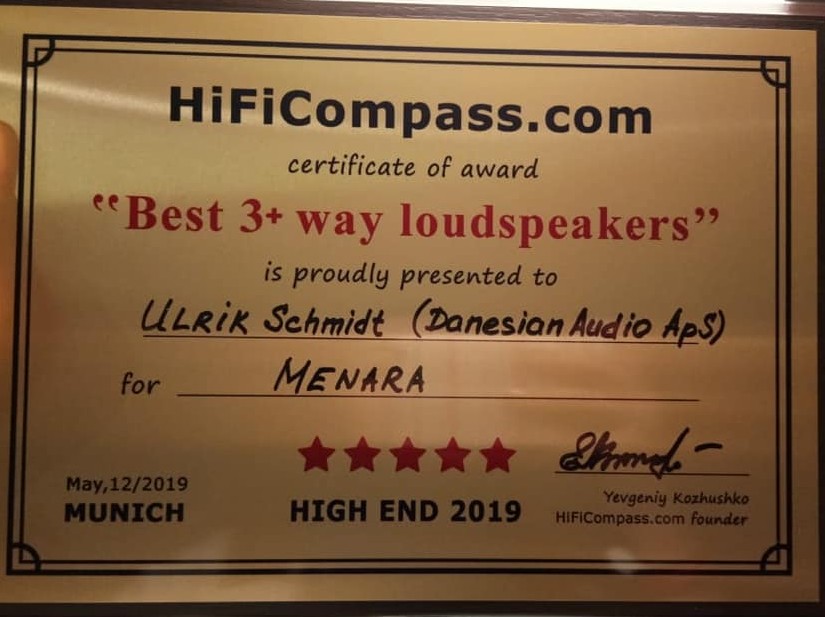 Stay informed about our events!